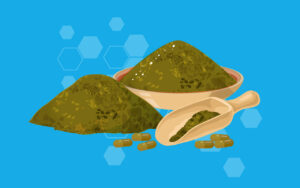 It amounts to this: there are no real rules about how ethnobotanical companies throw around the word “extract”. Companies that shall remain unnamed make it sound as if there is a scientific process involved in making Kratom “extract”, and put terms like 15x and 10x (I’ll explain the difference later) in front to make it appear that the concentration is increased in multiples. But all “extract” means in this case is that it was taken from something else; namely, the Kratom leaf. So they are capitalizing on a bit of a misnomer. Referring to some extracts as such is accurate in some cases, but not here.

The difference between powder and leaf is obvious, right? You can find a source for Kratom leaf, package it, and sell it at a little bit of a mark-up. But the difference between powder and “extract” is not so obvious. Say you and I buy a bag of Kratom leaves and mulch them in a coffee bean grinder. Now we have somewhat powdered our Kratom, but since a coffee grinder isn’t made for grinding leaves there are still some big chunks that we can’t break up. Even the particles that appear small to you and I could still be broken apart much more. For the sake of understanding, we’ll just say that the problem with this is that these big chunks and particles aren’t as easily absorbed by water, or digested by your stomach. Bigger particles mean that some active ingredients are wasted when they are not being absorbed, and since they take up more space, it will appear that you have to eat more Kratom to get the same effects as a more finely ground leaf.

But say you and I find a better tool to grind the leaf. Say we can grind the particles into a really fine dust. Your bag of leaves went from a bag to a bowlful to just a cupful of powder. Now (obviously) the same material is still there, it just takes up half as much space. Meaning that with the fine dusty powder you only need half as much to get the same effect. The smaller the particle, the more the overall surface area, and the faster and better the absorption.

Now that we’ve “extracted” our powder from the leaf, lets you and I start an ethnobotanicals business. We’ll call the coffee ground leaf just plain ‘ol “Kratom powder”. The slightly more ground leaf we’ll call 10x, implying that it is 10 times stronger. (Calling it 10x also gives us an advantage because it implies that we went through an involved scientific process to get it.) Hmm… so lets charge double for that, because people will think we have special knowledge and they can only get it from us. Now the really fine stuff… let’s charge triple what the material is actually worth, and we’ll call it 15x or 20x. *cough cough* Shaman *cough*