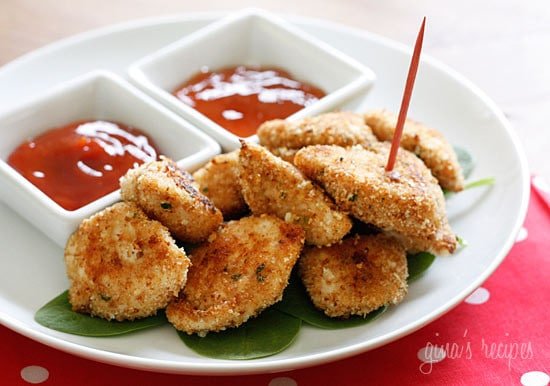 Here’s a nugget of not-so-surprising information: Chicken nuggets aren’t exactly healthy. The universal kiddie fave can be a quick fix for a harried drive-thru mom or dad, but the word “chicken” should sometimes be taken with a grain of salt.

Last year, the American Journal of Medicine published a study titled “The Autopsy of Chicken Nuggets Reads ‘Chicken Little'” which revealed that the nuggets from some fast food chains contained less than fifty percent of actual chicken meat. While white-meat chicken is a good source of lean protein, the unnamed nugget recipes contained a mixture of chicken parts (and cartilage, bone, fat and blood vessels) doused in chemical laden batter. Sound appetizing?

ABC news recently posted a listing of some of the ingredients for the chicken nuggets and tenders from four of the top fast food chains. McDonald’s famous Chicken McNuggets contain autolyzed yeast extract, sodium phosphates and hydrogenated soybean oil with the controversial preservative TBHQ, and Wendy’s Crispy Chicken Nuggets boast similar ingredients. The tenders and nuggets at KFC and Burger King also contain maltodextrin, which is often used as a sweetener.

While the fast food chains stand by their products and tout their readily available ingredient information, here are a few ideas for healthier chicken nugget options.

A recent Food Network article listed the best supermarket choices for chicken nuggets, with the Bell & Evans brand topping the list due to its simple ingredient list. Consumer Reports ranked the Health is Wealth brand as the most nutritious store-bought brand, but it comes at a price: “It’s lower in fat and sodium than the rest but isn’t very tasty,” the report reads.

Of course, there’s nothing healthier than homemade, and less is sometimes more when it comes to ingredients. During an appearance on “The Today Show,” Australian cookbook author Kim McCosker made kid-friendly chicken with just four ingredients: Raw strips of chicken, plain yogurt, crushed cornflakes and parmesan cheese. She baked the tasty treats in a 350 degree oven for about 20 minutes.

Speaking of homemade, there are more chicken nugget recipes out there then you’ll ever have time to try, but a recent roundup by Parade unearthed yummy finds that include nuggets made with chicken brined in pickle juice (that’s Chick-fil-A’s rumored special ingredient) and baked nuggets served with orange sauce.

And who says a nugget has to be breaded? Non-breaded chicken tenders can be cooked on a grill pan. (This recipe from Modern Mom is especially simple and tasty). And celebrity chef Rachael Ray marinates raw chicken strips in buttermilk for an hour before grilling. She also whips up a creamy honey mustard dipping sauce, because, let’s face it, isn’t dipping half the fun?